The Secret to Fundraising for a Walk 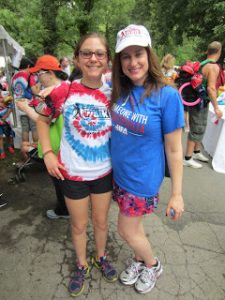 Does the thought of asking people for money make you cringe? Think fundraising is not for you? THINK AGAIN! I am a member of one of the most successful Walk teams in the country, a team that on average brings $20,000 a year to help the bleeding disorder community, and I do NOT like to ask people for donations. My hemophiliac daughter is a successful college student and all-around awesome individual. Her life has been improved with advances in research and through educational and support programs- all made possible with the help of donations, large and small. So, even though I don’t like asking, I know that so many people will benefit from the money raised, including my own daughter, that it propels me forward.

That’s the secret of my fundraising success: I get up the courage to ask, and I ask again. I ask on Facebook, I ask through email, I ask in person. I ask old friends and new friends and co-workers. People really do want to help. And I understand when people have their charitable dollars allocated elsewhere, and seek out those who don’t already have their own ‘cause’.

I explain the reality of hemophilia to people who don’t understand. They see Rose, as she is, a vibrant Ivy League student ready to conquer the world. But they don’t see behind-the-scenes infusions and bleeds and pain and expense of having a bleeding disorder. Social media tends to focus on the more glamorous parts of our lives and people need to be reminded that people with hemophilia really do suffer and have challenges. Modern medicine has allowed people with hemophilia in the US to live quality and long lives. But still, there is no cure.

Be creative with your fundraising asks. When Rose was younger she chose to have some birthday parties asking for donations in lieu of presents. And often the guests would surprise Rose by bringing a small gift and giving a donation. This year I partnered with a local salon, Salon Martone, to offer free services to those who donate to my page. You will be surprised and your heart will glow when you see how many people are willing to support your cause. Of course, there will be some disappointments too. Don’t be discouraged! Keep asking. And remember that every dollar makes a difference.

Set your goal high! People will want to help you reach your goal. Think you can raise $500? Put your goal at $1000 and watch how quickly you will exceed your initial expectations, and you will be amazed at people’s generosity. The New York City Hemophilia Chapter is an incredible organization that is involved in so many things in the bleeding disorder community- education, outreach and programming as well as research. They support people with bleeding disorders and the families who love them. Let’s do our part and help make 2016 NYC Hemophilia Walk the best ever. Start your fundraising today, or donate to my page (I had to get my Ask in somewhere!) http://walk.hemophilia.org/ShariBender.

For more information or to form or join a team, please visit http://bit.ly/NYCWalk16