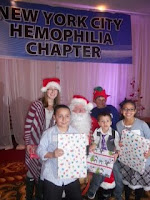 An unprecedented crowd of more than 250 registered participants came to New York’s Downtown Marriott on Sunday, December 12th for NYCHC’s Annual Meeting and Holiday Party. Meeting highlights included an informative presentation by Dr. Christopher Walsh who directs the Hemophilia Treatment Center (HTC) at Mount Sinai. Dr. Walsh talked about the current state of care, including recent developments as well as new treatments on the horizon. Using the refrain “bleeding is not an option,” Dr. Walsh emphasized that the goal of all treatment is the complete prevention of bleeding and its complications. He stressed the importance of prophylaxis in achieving this goal.

The program also featured an engaging presentation by Laurie Kelley on the status of care in the developing world and some of the things she and others are doing to improve it. Laurie is the founder and head of Project Share, which arranges clotting factor donations for patients in developing countries, and Save One Life, which sponsors individual children with hemophilia in those countries. Laurie’s presentation included dramatic slides and videos, many taken during her travels. They illustrated the terrible situations patients face in countries where care is either at a very low level or completely unavailable. Many attendees were visibly moved to tears by the stories of children who had lost their lives to complications of untreated bleeding disorders. On a more upbeat note, some of Laurie’s stories had happy endings as children who obtained donated factor and other forms of assistance in time had astounding turnarounds and are now enjoying better health and lives.

Participants also enjoyed a presentation by NYCHC President Shari Bender, who reviewed the chapter’s numerous accomplishments over the past year, including a very successful New York Hemophilia Walk, a capacity-crowd screening of the Bad Blood documentary, an expanded communications program and many more. Other educational sessions included group discussions on aging and transitions, inhibitors, and a self-infusion demonstration.

More than just an opportunity for learning, NYCHC’s Annual Meeting and Holiday Party was also a chance to enjoy friends, food and fun. An active children’s room featured arts and crafts, video games and more, all leading up to a visit by Santa Claus towards the end of the afternoon. Every child up to 18 years of age received a special holiday gift.

NYCHC’s Annual Meeting and Holiday Party is part of a year-long series of events designed to provide families affected by bleeding disorders with information, education and a sense of community. Please follow us on facebook and twitter to learn more about our ongoing programs and activities.